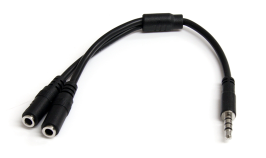 You may want to consider external equipment to help boost video quality. If you can only invest in two products, we recommend an external microphone and an image stabiliser. The Android video making guide offers a suggestions for both, which we’ve summarised here. For even more, see this suggested production kit from Small World News.

The consistent argument against mobile video is the poor sound quality of the built-in microphone. If you’re serious about shooting effective video, consider an external microphone, especially for recording interviews.

The good news is, you can purchase a low-cost adapter, called a TRRS adapter (shown here), which turns your audio out socket (the headphone socket) into a plug in for most external microphones. See this guide for suggested microphones.

Always test that your microphone is working with the adapter before recording.     Record some voice with the microphone, and tap the mike with your fingers. Can you hear the finger taps when you play back through the headphones?

If you can’t hear the finger taps:

NOTE: The TRRS adapter has two jacks, mic in and audio out (headphone). On the     devices we have tested, the headphone socket CANNOT be used at the same time as     the mic in socket. Record your test with the microphone plugged in, then remove     it.     Plug in the headphones to the other jack and play the recording back.

Another suggested external device is a stabiliser. Be sure to practise with these, as they can still cause blurring when the shot moves. We recommend the Slingshot Smartphone     Video Stabilizer (shown below).