With Google Hangouts, you can host up to 10 people in a video conversation and also share a stream of that Hangout. As a citizen journalist, you could host a stream on a particular topic and invite other individuals, experts or journalists to join the conversation.

At present, you can live stream your Hangout to YouTube if you are streaming from a computer. This means that anyone who can watch your YouTube channel can also see your streaming video. To share the Hangout, you’ll need to use Google Hangouts On Air.

This connects your G+ account to your YouTube account (both owned by Google), streaming through G+. When you complete your Hangout on Air, the video is saved directly to YouTube. People can watch your streaming Hangout while you are streaming, and by viewing the recording on your YouTube channel afterwards.

This is an example of a Hangout On Air where the hosts used a webcam to capture a workshop.If you are using a mobile device instead of a Mac or PC to record, you can host a hangout with up to 10 people (yourself and nine other people), but you cannot stream and save to your YouTube channel.

Cost
It’s free to download and to use Google Hangout On Air.

Compatibility
You can host a Google Hangout from mobile devices, tablets and personal computers via the Chrome Browser.
The Android app works on Android 2.3+. The Apple app works on iOS 6.1+, across iPhone 4+, iPad 2+, iPad Mini and iPod Touch 4th generation. The computer app requires Chrome runtime.

Install
On some mobile devices, such as Samsung Galaxy Note III, below, you can find Google Hangouts in the Google suite of tools, under apps. If you don’t have this option, just search Google Play for “Google Hangout” and install the app.

On a computer, you need to install Google’s browser, Chrome. 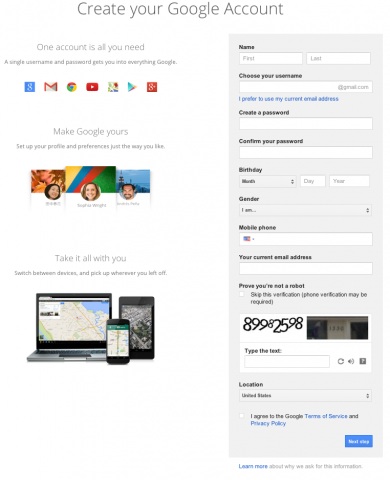 Set Up Account
You’ll first need to join Google+ in order to use Google Hangouts. On a computer or from a mobile browser, you’ll see a screen similar to this. Enter the required information.

As with Bambuser, it’s important to understand what you’re getting into with Google Hangouts. If privacy or security is an issue due to your reporting environment, be sure to check the terms of use on the Google site. The Google site lists further information on names, content deletion, privacy and security, deleting or restoring accounts, and search and seizure.

For more on security issues for the mobile citizen journalist, please see the Secure My Video (Version 2.0) Guide.

Start Streaming!: Streaming with Google Hangouts On Air on a Computer
First, open up your browser to https://plus.google.com/hangouts.

After you click, you’ll see a message that says ‘Preparing to Broadcast’. It may take a minute for this to change to ‘Start Broadcast’.

Using Google Hangouts On Air/YouTube on Your Mobile Device

Remember, you cannot stream to an open audience from your mobile and you can only Hangout with up to 10 people (yourself and nine other people).

On a mobile device, just open the Google Hangout app and click on the + sign in the upper right corner of your screen. Then, type in the name(s) of everyone you want to hang out with. You’ll need to actively invite people to your Hangout.

On the bottom (see right screen below), click ‘Video Call’. Google Hangout will ring the listed contacts, and you’ll immediately be connected via video. 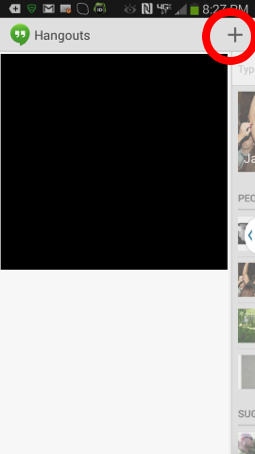 Sharing on Google Hangouts
As a citizen journalist, there are ample opportunities to engage with or increase your audience during a Google Hangout.

Remember, people can join your Hangout as participants in the streamed video. People can also use the Hangout chat feature to comment on your video or pose questions. People who are not directly a part of the Hangout can view your stream, both on YouTube and Google+. 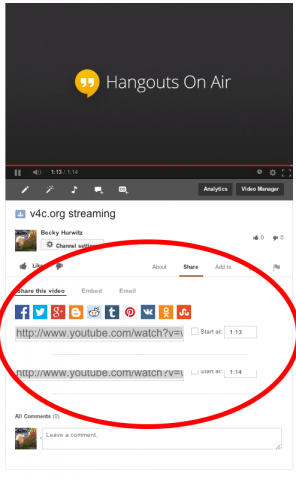 Sharing Your Google Hangout Video on Other Sites
You may want to share your video on sites beyond Google. Your Hangout will publish to your YouTube channel. Go to the page where your video has posted on YouTube; you’ll see buttons for sharing on various sites. You can click a button and a window will open for you to sign into the other service and share. There is also a URL that you can copy and paste into other locations.

Using Without Connectivity
If you lose connectivity, you will not be able to use Google Hangout. But you can use your YouTube channel to share video that you shot while you were offline, by uploading it later when you have connectivity. 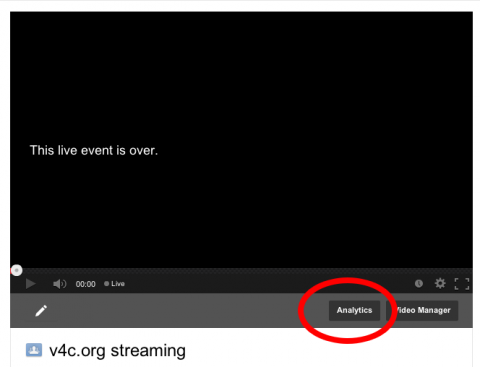 Optimise Your Google Hangout/YouTube
To see statistics on your video views, log into YouTube and open the page where you find your Hangout video. Click ‘Analytics’. 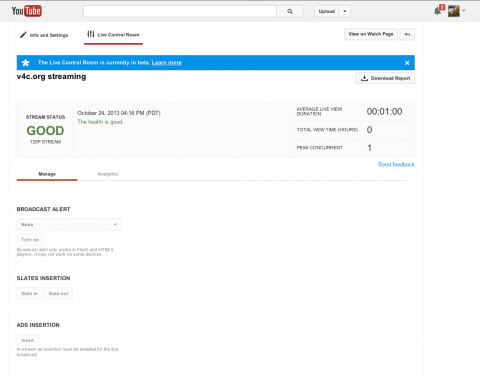 You’ll see a screen like this, where you can track your stream status, average live view duration, total view time and more.