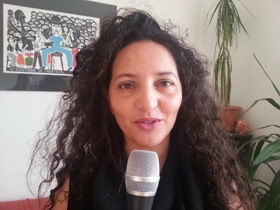 These three templates for fast-turnaround video news reports have been developed by media project visionOntv1 for shooting on mobile devices.

They cover single-take interviewing, single-take reporting, and shooting resuming video on mobile devices. They enable you to produce short videos that require no editing, which can be distributed straight away after they have been filmed.

The templates have been developed for absolute beginners to get the most out of their mobile video technology, and for people with skills but little time. They are released under a creative commons licence and will feature in visionOntv’s Citizen Media Handbook2, to be published in 2013.

BUDDY UP! This template needs two people, an interviewer and a camera operator.

Android devices can record with an external microphone. See the Video and Audio Techniques chapter for details of the audio adapter and how to use it.

Run a microphone test. Record some voice with it, and tap the end of the mike with your fingers.
Can you hear the tapping when you play back through headphones?

The interviewer should have an informal chat with the interviewee to find out the most interesting / funny / outrageous / tragic things they have to say, and prepare the questions to elicit those answers.

Your questions can be opinionated, and should cover everything the viewer needs to know.

Don’t do a “dry run” or rehearsal of the interview itself, as the interviewee will go flat the second time when you actually record. Make this “pre-interview” appear like a normal chat. At the same time, make sure you get the background information that you need, plus her name and her title, or how she likes to be described.

The camera operator should practise framing her shots during this, but without putting the interviewee on edge.

Reporter: Stand close to the interviewee and tell them to talk to you, NOT the camera. Remind them there is no editing, just one take.

Camera operator: There are just 5 static shots. The interview is filmed in a single take, and you move smoothly and quickly between the 5 shots.