In 2004, two years before production, Arfan (director) studied leprosy on the remote Liukang Tangaya Islands. To access the islands, Arfan and the leprosy research team had to sail for 24 hours using traditional wooden boats. At that time, Rabiah was part of a team tasked with connecting researchers with the community. Rabiah was the head of the Community Health Centre on those remote islands and had been working there for 32 years.

That was the first time Arfan had sailed and realized the imbalance of health services on remote islands in Indonesia. The island community was far from hospital access, there were no doctors, and there was no means of fast transportation if something bad were to happen. Meanwhile, their islands were surrounded by high waves, sometimes reaching five meters or more.

In 2006, the story of Rabiah serving in the remote Liukang Tangaya islands was produced after qualifying as one of the five finalists of the Eagle Awards Documentary Competition (an Indonesian competition for young documentary filmmakers). The documentary was later titled “The Floating Nurse” (Suster Apung) and aired on national television in Indonesia. Rabiah’s straightforwardness, as well as her firm and honest speaking manner, helped earn the film great accolades. The Floating Nurse won three of the five award categories at the 2006 Eagle Awards: Best Film, Best Cinematography, and MetroTV Viewers Favorite.

After winning the 2006 Eagle Awards, the film and its protagonist received great appreciation in Indonesia. The Floating Nurse seemed to awaken the Indonesian people from the illusion of being the “Emerald of the Equator”, by showing how health care conditions on remote islands were poor and largely forgotten. At the same time the short documentary film also showed that there were still people like Rabiah who were willing to work on these remote islands to provide health services and work wholeheartedly.

Rabiah herself also received much appreciation. Rabiah was invited to talk on the KickAndy program (a popular talk show on national television in Indonesia). During this talk show, the Indonesian Vice President at the time, Jusuf Kalla, gifted her a boat. Since then, almost all media covered news about Rabiah and presented her with awards. Rabiah became one of KickAndy’s Heroes and TEMPO magazine also included Rabiah as a Hero of the Present. And there were more. 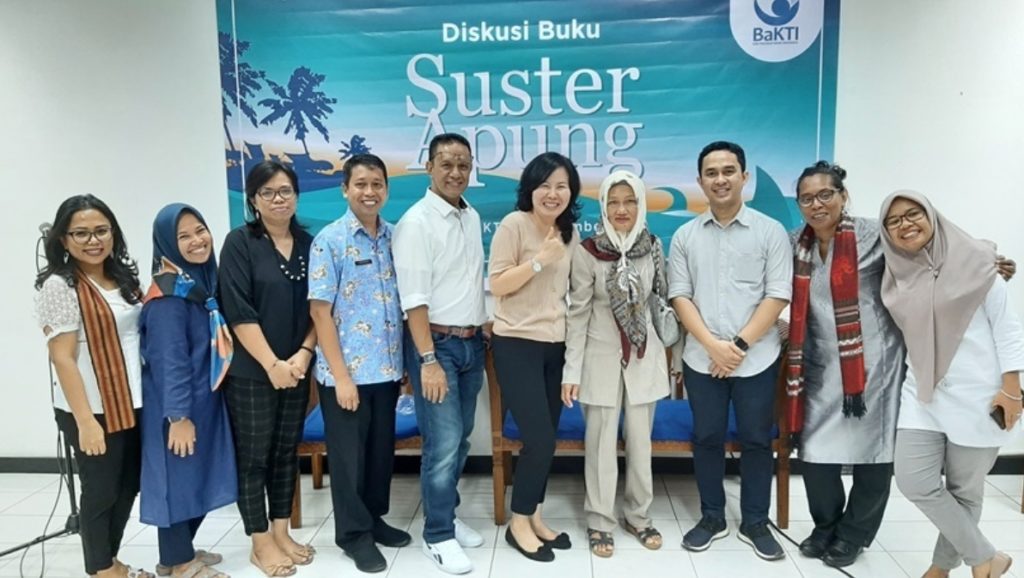 Book launch of Suster Apung, Dec 2019, with Arfan and Rabiah standing 3rd and 4th from the right

The Indonesian Health Minister awarded and invited Rabiah and Arfan to hold dialogues on health services in remote islands. Some of the things discussed were the regulation of the authority of doctors and other medical personnel, and that medical personnel like Rabiah who are placed on remote islands should be able to take the necessary medical measures to save even those outside of their authority.

In addition to the Health Minister, the Women’s Empowerment Minister also named Rabiah a Present-Day Kartini. Some private parties also tried to invite Rabiah and Arfan to discuss how they could help. There were banks that provided some financial assistance for Rabiah, one food company provided baby milk powder to be distributed to the islands, and there were also companies that appointed Rabiah as an icon for devoted and sincere workers.

However, the large amount of public interest in discussing the hero of The Floating Nurse and the issue of health services on remote islands was exploited by politicians who would compete in the 2009 Presidential Election. Rabiah, who had just finished being a guest on KickAndy Off Air at Hasanuddin University in Makassar, suddenly requested permission from Arfan to fly to Bali to shoot a “public service announcement”. No one expected that the production was a political advertisement of one of the politicians who wanted to run as a candidate in the 2009 National Elections. Rabiah thought that the “public service announcement” was a health promotion advertisement like what she would usually see on television. That was why Arfan and Rabiah decided to hold a press conference on August 15, 2008 (article in Indonesian) to assert that Rabiah was not aware of her role in and the purpose of the political advertisement. Rabiah also requested that the advertisement be stopped because she did not want to be associated with political activities at the time.

More than a decade after the Floating Nurse documentary, several positive changes have happened, in terms of health services, transportation, and communication facilities. However, that does not mean everything has been resolved perfectly.

Filmmaker Arfan recently published his ‘Suster Apung’ novel about his experiences after many years of ups and downs working in remote islands. He is currently producing the documentary Rabiah and Mimi, which tells the story of Rabiah and her daughter, Mimi. In addition to showing the current condition of health services in remote islands, this film will give insights into the daily lives of a family willing to work on remote islands. Rabiah and Mimi was successfully pitched by Arfan at Colors of Asia 2020, during Tokyo Docs, November 2019.