Thirteen activists, filmmakers and human rights advocates who use video as a tool for social change arrived at Centro de Derechos Humanos Agustín Pro Juárez. It was a gathering of people from Costa Rica, El Salvador, Guatemala, Nicaragua and different parts of Mexico. The first meeting of video for change in Mexico and Central America began at dinner, where we all participated in an exchange of experiences and knowledge. Afterwards, attendees talked a bit about their organizations and screened one of their productions, giving rise to the sharing of strategies and best practices among participants.

The next morning, the group had grown to 20 members, and the atmosphere was colorful. At nine o’clock, activities began with the agenda and the establishment of rules, goals and expectations with the collaboration of all the participants. Laura from Witness was in charge of the session on challenges and needs in organizations that use video for social change. Then we had a videoconference with Andrew Lowenthal from the Engage Media collective, who spoke about V4C (video for change), its meaning, how it was born, its projects under development and future plans. Participants built a resource map which shows the materials that each organization has, the formats and how can we access them. This resource map works like a rustic search where attendees recognized their needs for materials without having to bend in their efforts.

During lunch, the attendees continued sharing and articulating new ways of collaboration. After that, an amazing activity took place: the sharing of positive experience.This space served to learn more about the efforts of the participants. After that, Juan Manuel Casanueva from SocialTIC talked about the development of strategies in social activism, emphasizing the need for communication and the subordination of video or any other tool in favor of the campaigns objectives and results. First day’s activities ended with more screenings of videos produced by participants in V4C. Fernando Carcache presented the Loma Verde soap opera, an effort made, produced and distributed by Fundación Luciérnaga. The soap opera impressed the film makers due to the technical quality, great storytelling, character development and proposal of a new form of social education. 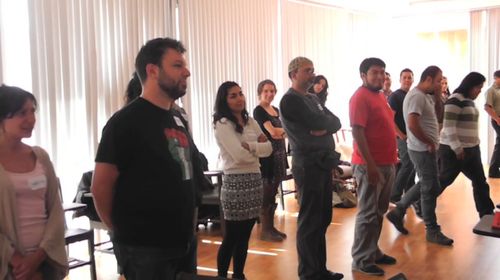 Breakfast on Friday looked like a family reunion. Attendees talked and shared stories as they prepared for the second day of the meeting. The first activity, was to divide the group according to the causes their organization works with. The main topics were land, territory and natural resources, education, human rights and communication. The next session was led by Sergio Araiza from SocialTIC, who talked about digital security. This session was really important, as in the meeting there were people from organizations that work with sensitive issues.

Last session before lunch was devoted to sharing and presenting best practices in the use of video as a tool for social change. Some colleagues had recorded videos about the mobilizations, violence, repression and human rights violations that occurred a few days before the meeting with the teachers in Mexico City. The discussion about the role of video in this type of movement was intense and lasted until meal time.

Later that day, we had two breakout sessions presented by the attendees of the meeting. The first one was given by Fernando Carcache from Fundación Luciérnaga and Noe Valladares from Video Escuela Mesoamericana; together they explained how to evaluate and monitor projects that use video as the main strategy for social change. Their experience, the cases they presented and the clarity of their ideas helped the audience understand the importance of evaluating and monitoring social strategies, in addition to being encouraged to use simple tools to carry out these important tasks. The second session was about video production with free software tools and it was presented by Jorge Alban from Artenemo.

The next activity was to reach agreements in the group to continue the collaboration, teamwork and sharing of materials, knowledge and good practices.

The closing of this meeting took place in a festive atmosphere, with the participation of 30 people between participants and organizers. There was feedback, and some music courtesy of some of our colleagues. There was an atmosphere of camaraderie and the feeling that something big was coming. 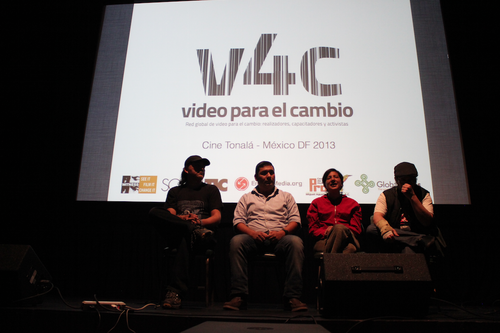 On the day right after the closing of this meeting, we celebrated the Social Video Award launched by Global Voices in Spanish. The event was held at Cine Tonalá and started with a panel with Laura Salas, Fernando Carcache, Noe Pineda and Quetzalcoatl Fontanot. They talked about the uses, best practices and future possibilities of video as tool for social change. After this analysis, the contest winner was presented.

The first meeting of directors, trainers and activists who use video as a tool for social change reached its goal of bringing together different organizations to share experiences, knowledge, materials and to explore the possibility of future collaborations and solutions to common problems.

This meeting was possible thanks to the collaboration of Andrew Lowenthal and Cheekay Cinco from Engage Media; Chris Michael and Laura Salas from Witness; and Jaime Fraire, Juan Manuel Casanueva, Alberto R. Martinell, Sergio Araiza, Mariel García and Aura Montemayor from SocialTIC.