On 24 and 25 March, 12 video activists from Jakarta, Bandung, Cilacap, Cirebon, Purwokerto, and Jogjakarta came together at the first Video4Change gathering in Indonesia to share their experiences in making videos for social change with a focus on impact. The gathering was designed as a participatory process where the participants discuss and arrive at their own definitions of terms and indicators of impact based on their knowledge, experiences and contexts. While past Video4Change (V4C) materials and research findings were used as guidelines, we found that self-definition was crucial to keeping the process more realistic and reachable.

The first session was a discussion on the social issues that they took up and captured in their videos, whether or not they have specific goals when they make their videos and what impact have their videos made so far.

We found that most of the participants take up a variety of social issues ranging from wider ones such as 1965 massacre and human rights, to more local ones such as waste management, city planning, and economy in small villages. Although the video activists mainly aimed to make impact in specific communities or society-at-large, through the course of production they also experienced impact at a personal level that was sometimes unexpected. Many related that they gained a deeper understanding and connection to the issues and the subjects in their videos. 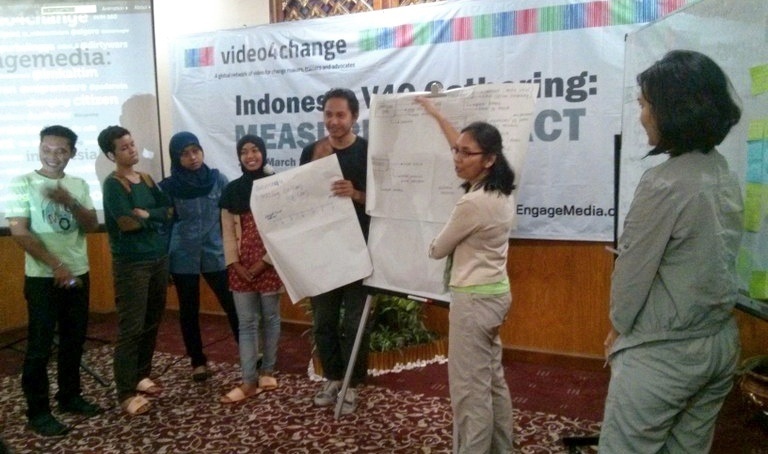 It was evident that they always had their goals in mind when making videos, but it seemed problematic to measure whether the goals were met after distribution. The lack of success indicators set in planning stages and capacity to track impact contributed to this.

The next session was for participants to discuss in small groups about their specific videos and impact that followed. Each group then shared the mapping of one video in a plenary, which served as a case study to discuss the impact at personal, community, and societal levels. This was followed by a presentation from EngageMedia on V4C’s research findings, some sample methodologies to assess impact, and key challenges to allow the participants to learn from video makers from other countries.

The second day, as collectively agreed upon on the first, was used to share skills on video-for-change, safety and security, social media promotion, and online subtitling using Amara, all in order to increase the impacts of their videos. The skills-sharing was done by both the facilitators and the participants themselves. 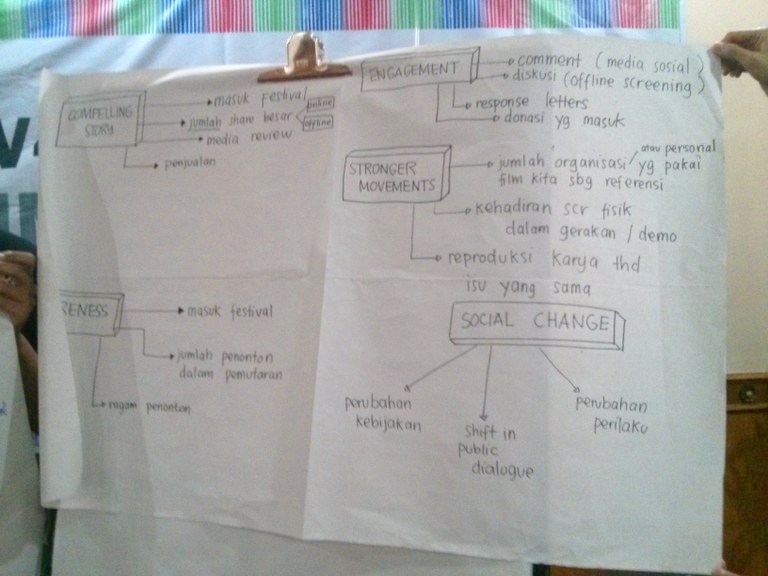 The final session was looking at methods participants have been already using to measure impact and how to improve. This meant setting a number of realistic indicators and having ways to check whether videos meet their specific goals using those indicators.

The discussion went deeper to how video activists can work together and with other individuals and organizations to make social change as intended.

Bringing together many different experiences and backgrounds (some participants were experts in their fields and some were new to video-for-change) made the gathering a fruitful learning process for everyone.

At the end of the two days, most participants were keen to have more gatherings such as this to discuss evolving strategies for making good advocacy videos to achieve bigger impact and pave the way to the change they want to see.