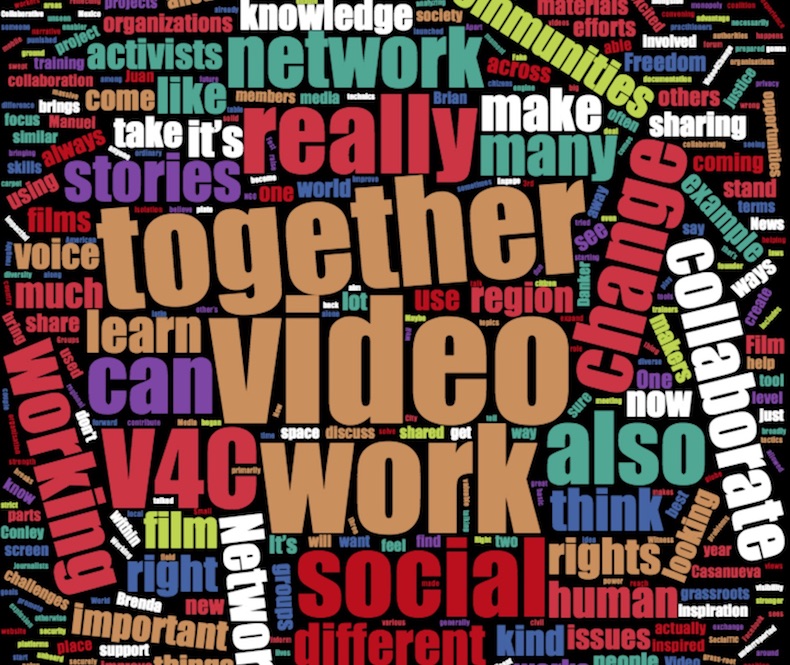 Members of the Video4Change (V4C) Network share what the Network is about, where they find common ground, and what are its future plans.

“Video For Change is a network of human rights activists, Journalists, trainers, video practitioners; all working together to improve the world through video.” -Brian Conely

Video4Change (V4C) is a network of 12 diverse organizations whose common goal is to defend human rights and justice using video for change. Members of the V4C network gathered for a meeting in December 2017 on the side of the Global Voices Summit in Colombo, Sri Lanka.

We talked to some of them to learn about what the Network is about, where they find common ground, and what are its future plans.

Sam Gregory is the Program Director of WITNESS and in this interview he talks about the Video4Change Network, its emergence, its working process and the progress.

“V4C is a forum for us to learn from each other what makes a difference. It’s a place to think about what we should say as a voice projector, it’s a place where we collaborate together.” – Sam Gregory

According to him, the work of the Network can be broken down into three categories.

Sam Gregory adds a bit about what is coming next:

“We are looking at how we can take a position within the coalition that is coming together around the right to record. To really stand up for what is the basic expressive right of the people. What happens is that when someone sees something going wrong, often they take out their mobile phones and they film and share what they see. And in many places that is criminalized, that’s not allowed, or its punished by the authorities. So it’s a critical space for a network like the V4C Network to stand up.”

“We all have one aim, which is to use video for change.” -Brenda Danker

Brenda Danker is an educator, researcher and media producer in Malaysia. She teaches filmmaking and mentors a new generation of social documentary filmmakers through Freedom Film Festival Malaysia. Freedom Film Network (FFN) is a collective of social filmmakers who make films that discuss the alternative narratives which are under-reported. In the above interview, Brenda Danker tells about the V4C Network:

“Being a member of V4C personally I am really inspired. When I learn from the other members, the sharing of experiences, knowledge, skills; I am inspired and motivated to continue to do the work I do.”

“We believe that video can be an engine for social change, and social justice.” – Brian Conely

Brian Conley, co-founder of Small World News, has been involved in media literacy and media democracy work for more than 10 years and has trained journalists and citizen media makers in a dozen countries. Small World News supports journalists and activists in under-served communities around the world. He mentions in the above interview:

“Our focus a lot of the time is to help people use technology to improve their work and solve problems. So now we are doing that not only for video journalists and video activists, but also for the human rights defenders and people who are doing documentation work, and generally activists and journalists.”

“Working together will always be much more impactful.” -Juan Casanueva

Juan Manuel Casanueva researches and promotes ICT projects for development and social action. He founded SocialTIC A.C., an NGO which seeks to enable actors for change through the strategic use of digital technology and information. Casanueva tells about collaboration: “V4C always brings new collaborations on the table. One of the big collaborations we are talking about now is how to support many other video groups which the network is supporting in terms of digital security efforts.”

Watch the interviews above to learn more.