Social change must by necessity be social. However, the auteur documentary impact model is one where creators often work behind the scenes for years, waiting to release their product with a big bang of impact. Such models have focused on impact as something you do at the end of the process and have predominantly focused on the media’s effect on audiences.

However, new technologies and cultural shifts are constantly changing what social impact is and how different media and actors can contribute to it.

While there have always been alternative impact models to those of “big documentary,” changes in the patterns of production and consumption of video (as opposed to film) are pushing such alternatives further into the spotlight.

Video is becoming more and more ubiquitous. As an event, it is more modes than film; however, the unrelenting nudges of video in the daily swarm of information mean the medium’s collective long tail may cumulatively create more social impact than big documentary.

The Video for Change Approach

With this in mind, EngageMedia, in partnership with the Video4Change Network, created the Video for Change Impact Toolkit. The Video for Change model is founded on co-creation, focusing on short-form digital video made with limited budgets by filmmakers primarily working in what’s being called the Global South.

We emphasize what we call the “Impact Pathway” – the idea that through collaboration, particularly with affected stakeholders, each stage of an initiative has the potential to create impact — from research and planning, to capacity building, through filming, outreach, engagement, all the way to evaluation.

The model draws on methods of open-source software production—thinking iteratively, collaboratively, and in networks. This means thinking of evaluation as something done throughout the process rather than something that is only done at the end.

The call to co-creation and participation is both practical and ethical. It shifts the model of representation, generating ownership and building champions for an initiative who will propel its distribution and engagement. Such ownership ensures that the content is more likely to be used as a tool by those who most need it. These ethical models are explored more comprehensively in our paper on Video for Change and impact.

None of this is to say that long-form is lost—the sustained concentration it demands is a welcome opportunity to stop and think more deeply. Still, other opportunities need to be considered more broadly, and short-form video is tugging in other directions, changing how we think about impact and other emerging opportunities.

The “always-on’” information circus has its limitations, and the approach EngageMedia proposes also seeks something deeper than mindless compliance with default social media engagement models. Rather, much of the Video for Change approach is a call towards the offline world.

While we don’t make a distinction between “real’” and “virtual” worlds, the Video for Change Impact model does include significant emphasis on offline engagement, designing for and evaluating change on the ground.

There are a variety of ways we do this, perhaps best expressed through the example of the documentary film, “Love Letter to a Soldier.” The film is about Maria Goretti and her child who were abandoned by an Indonesian soldier, and how they were subsequently shunned by their community in the conflict-ridden provinces of West Papua. The production value was quite low, but the personal story and diary-like storytelling approach captured audiences’ attention.

The film had a wide variety of offline impacts, including:

Cumulatively, this contributed to building a more resilient movement for human rights and social justice in West Papua. Almost all of these outcomes were the result of offline work. The breadth of impact from the personal to top-level advocacy, as well as the large number of independent activities (screenings, subtitling, etc.) went beyond the scope of the original initiative.

While it is not possible to point to a specific policy change, we believe this is not a realistic expectation for a short film. Here, the objective was more about supporting advocates to do their work more effectively. Read the full case study to learn more. 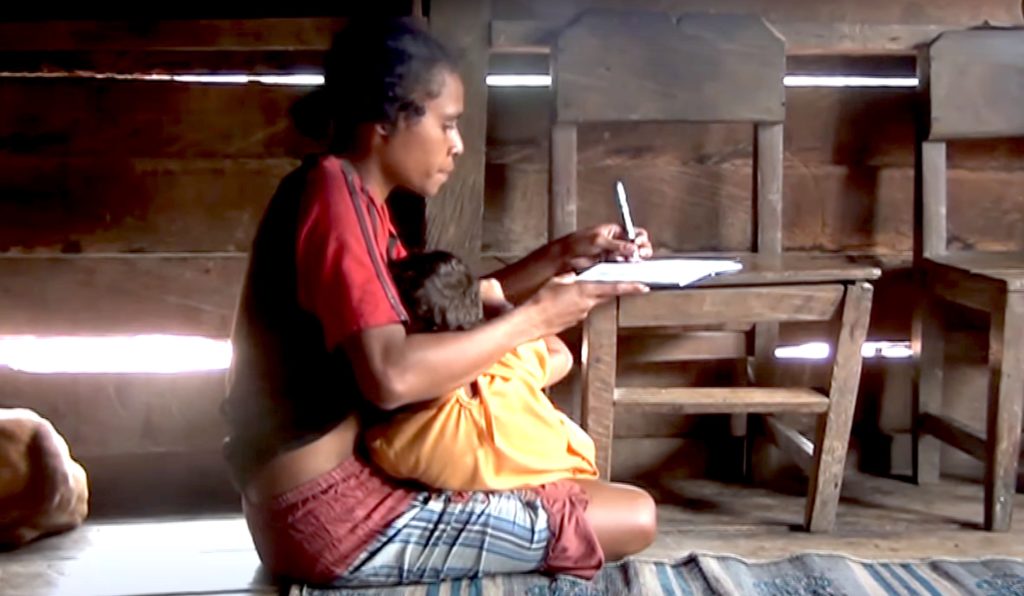 Still from Love Letter to a Soldier; Maria Goretti writing her letter.

Such impact isn’t as visible as data on viewership, clicks, and shares. Intensive follow-up over a long period of time is often required. Tracking these changes was difficult and was mostly the result of strong ongoing relationships in West Papua. EngageMedia, who produced the film, is still supporting West Papuan filmmakers today, eight years after the film was released.

This support takes the form of very personal relationship management, surveys, focus group discussions, and simply sitting down for a long time to understand, in an informal setting, what has been going on, who is now doing what, how these relate to the initiative, etc.

Such qualitative assessment is, of course, resource-intensive; however, if you are looking for significant impact, then your engagement is going to be long-term by necessity. Activities such as these need to be built into the design.

The Video for Change approach suggests developing an Impact Statement at the start of your initiative – essentially the proposed set of outcomes and outputs you are aiming for, later serving as a baseline for monitoring and evaluating your success (or otherwise).

The model is built around the Types of Change that we identify in the toolkit, and we produce different indicators based on which stage of the initiative you are working on (e.g., capacity building, filming and production, engagement and distribution, etc.). 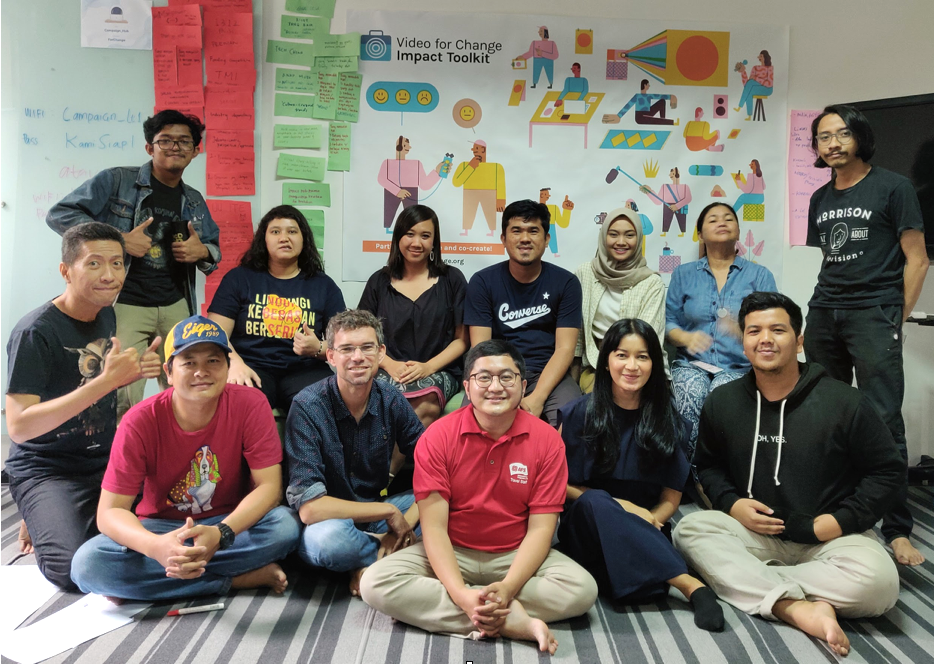 Video for Change Impact Toolkit Co-Creation Lab, held in Jakarta prior to the release of Indonesian Language version of the Impact Toolkit, December 2019.

We specifically suggest that people look for the following:

The examples noted here have very little relationship to the number of eyeballs that see the video or related aspects of the initiative, which isn’t to suggest that audience size isn’t also important. However, they seek to highlight the fact that the closer to the initiative someone is, the stronger the
impact.

We also encourage people to document intended and unintended impacts—often, assessment focuses only on measuring what was planned; the biggest impacts are often serendipitous. Similarly, both positive and negative impacts should be documented. Often impact is thought of as a positive outcome from an intervention. But it should actually comprise all the outcomes, including the negative ones. These might consist of the following:

We refer to the final result as an “Impact Story,” a summary of everything that has happened as a result of the initiative. We emphasize the “story” aspect, as this assessment is also an opportunity for outreach and engagement with various stakeholders.

The Video for Change approach is not solely offline; we design for and evaluate online impact as well. However, we want to promote a more holistic model and point out the pitfalls of the heady rush towards techno-utopian approaches. We want to approach understanding impact in a way that isn’t designed around the mechanisms that produce the highest quantity and most easily accessible data.

We should be particularly cautious of these types of approaches, as manipulation and misinformation in social media has become increasingly apparent, from deepfakes, to threats to privacy, and beyond. The 2018 Cambridge Analytica scandal was the last straw that finally broke civil society’s mostly uncritical engagement with corporate social media, capturing a game-changing level of public attention.

Still, the way that the impact field is approaching these issues hasn’t fully caught up, and too much emphasis remains on the use of tools and platforms we should instead be criticizing and relying on less.

With this in mind, EngageMedia is also beginning impact and engagement experiments with alternatives to corporate social media. We want to see what possibilities exist when more ethical, privacy-respecting platforms and technologies are used. Can we find a way out of the knee-jerk media engagement practices to which companies like Facebook and Twitter have accustomed us?

These more iterative, collaborative, networked, and social approaches to impact require methods of evaluation that are still emerging. Ones that temper the reliance on data and machine learning as an oracle explaining the past and future, ensuring a more critical approach similar to Tricia Wang’s theory on “thick data.”

In the Video for Change Impact Toolkit, we have explored a range of indicators that might be helpful towards the end. But much more can be done to develop something truly hybrid that also doesn’t reproduce social media surveillance models.

We hope we might find some answers (or at least map the dead ends) in our forthcoming experiments.

Andrew Lowenthal is the Co-Founder and Executive Director of EngageMedia. He has been working in the field of media and technology activism since 1998.