Understanding the Practices and Impact of ‘Media at the Margins’

This post looks at the work of Professor Clemencia Rodriguez who has spent twenty years researching and supporting citizens’ media initiatives in Colombia. In reporting on a talk and workshop Clemencia gave last week in Sydney, I consider what the video4change network might learn from her ideas, theories and methodologies in our own efforts to better plan for and document impact.

Last week Prof. Clemencia Rodriguez delivered an inspiring keynote talk at the University of Western Sydney’s post-graduate conference titled, “Media at the margins: Lessons from the field.” Clemencia is a leading media and communication studies scholar and in 2000 she coined the now widely adopted term ‘Citizen’s Media’. She is also co-founder of OURMedia/NUESTROSMedios, a global network of alternative media organisations. 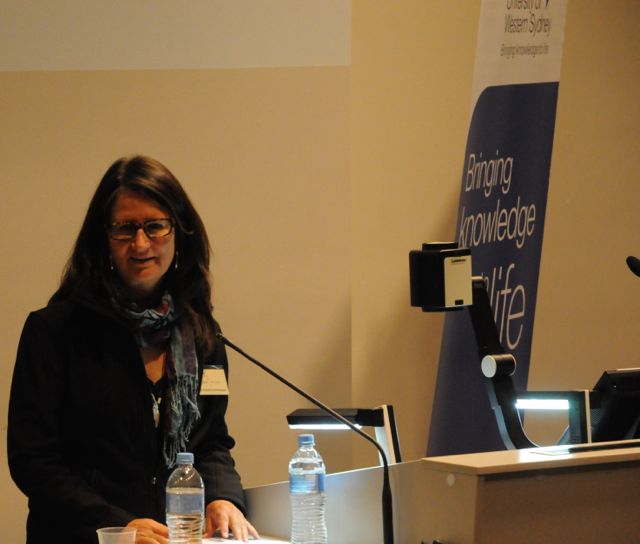 In her keynote talk, Clemencia spoke about what she has learned from two citizen’s media initiatives in Belén de los Andaquíes in Southern Colombia. The first initiative, a community radio station called Radio Andaqui, which pioneered the Radiocicleta or Radiocycle, is focused on supporting peaceful dialogue and engagement in a region marred with extremely high levels of armed conflict and violence. The second initiative, Escuela Audiovisual Infantil [Children’s Audiovisual School], works in the same region to support children to create and share digital stories about their lives, ideas, passions and hopes. Looking at both initiatives over a long period of time, Clemencia said she realised that simply describing what these initiatives produced, neglected a focus on how and why they produced what they did. That is, focusing on the media, only told part of the story.

Clemencia’s talk also connected with her earlier, influential work on ‘citizen’s media’. In Fissures in the Mediascape: An International Study of Citizens’ Media (2001), she urged practitioners and scholars who study and make ‘media at the margins’ to avoid thinking of this work as simply ‘alternative’ or in any way positioned ‘against’ or indeed in relation to mainstream media. Rather, she encouraged us to really see what was happening as something unique and different with a very different kind of power and capability. Citizens’ media, she states, provide a place where “people can experiment with words, images, sounds and special effects…selecting, rejecting, re-accommodating and reappropriating the symbolic to create their own grid….” (Rodriguez 2001:151).

This ability of citizens’ media to enable people to challenge the ways they are portrayed and dominant narratives was evident in the stories Clemencia shared with us in her keynote talk. In one story she shared from 2007, children in Colombia tell a positive digital story about cocoa growing in their region that contrasts with the US-driven narrative about the illegality and destructiveness of cocoa farming. Citing other more recent examples, she spoke about the human microphone used at Zuccotti Park during the Occupy protests and the use of cookies by students at her own university to deliver messages in ‘Bible Belt’ of the US about women’s reproductive rights. All of these examples, she said, show a real knowledge of current frames, dominant ideologies, restrictions or imposed limitations and they use appropriate media in creative ways to deliver messages that challenge these or to provide alternative ways of seeing or understanding.

But Clemencia’s keynote also provided a new provocation when said that our current focus on media forms had led us to neglect the people who make media at the margins: the communicators. “Creating social change through media is not about the tools you use, the technologies, the perceived quality of the media produced. It’s about a real and deep understanding of needs: knowing what will work for your community.” To understand this ‘knowing’, she suggests that we need to start shifting our gaze toward “that moment, the moment the communicator figures out what will work. This requires an understanding of the situation, of the need, of the media ecology and how to best use the available technology to address the need. It’s about being embedded within and attentive to the environment you are working in.” By focusing on this pivotal moment, she suggested, real insights can be found and then shared.

Clemencia also made a point about the “Margins” she often refers to, telling us that they can be everywhere and anywhere: “you never know when they will turn up and you may very well find media at the margins in the mainstream.” Exactly what ‘the margins’ are, however, was left a little ambiguous – perhaps, because this is the focus of a new framework she is working on. However, Clemencia did suggest that the margins are places where contestation and re-framing take place; places where stereotypes and dominant ideologies can be challenged.

Learning from our memories

Following her keynote, Clemencia provided a Masterclass session where she shared with us an approach she had used to capture stories about the impact of a network of radio stations that shared a goal to address conflict in Colombia.  The approach was developed by Pilar Riaño-Alcalá as a pedagogical tool to build, document and learn from collective memory. The approach builds on the popular education approach of Paulo Friere, whose work has also inspired many using participatoryvideo approaches, whereby education starts with a belief that people have knowledge and education is really about supporting them in an engaging and appropriate way to put this knowledge into the public sphere.

Clemencia’s impact study brought together 60 people who worked at the radio stations in diverse roles including cleaners, announcers and directors. Over a five-day period, the participants were engaged in memory-based storytelling activities that were related to the objectives of the stations. For example, an objective to ‘help communities resolve violent conflict peacefully’ becomes translated into a ‘memory triggering question’ which might begin with: ‘Please remember a moment in which you experienced that the station was able to help the community resolve conflict through dialogue or peaceful means?’ After one example is selected by each participant, this is followed by a prompt to ‘try to go back to that very moment’ followed by more specific questions such as: ‘what did you feel at that very moment…what did you hear at that moment…was it hot….who was with you…’? Participants are then asked to visually illustrate these moments on paper (using crafts) and these ‘moments’ or stories are then finally ‘stitched together’ on the wall in a kind of “memory quilt.” The participants then discuss what they see: identifying themes, key moments and insights and visible gaps (for example, where they may be a lack of women or children represented).

Clemencia says that what makes this approach different to other narrative based impact story collection approaches (like the Most Significant Change technique, for example) is its focus on memory and the use of memory triggering questions. This focus, she says, breaks people away from the official discourse you will get if you simply ask a direct question about impact.

What can we learn from this approach and Clemencia’s work? 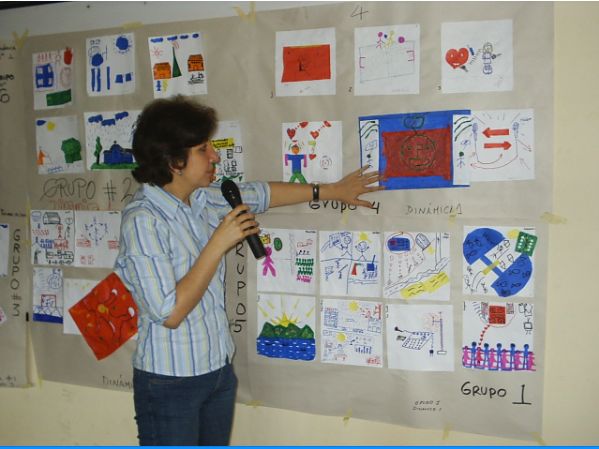 As we develop our own video4change network framework for designing for and evaluating impact I think we can take three things from Prof Clemencia Rodriguez’s talk/workshop and her broader work on media at the margins.

Firstly, this approach of memory-based impact storytelling and documentation may have some resonance for the video4change network and is an approach that is likely to come quite naturally to people whose work already emphasises and values storytelling. But while it may be a useful process for capturing past stories of impact and collectively learning from these stories, usefully moving us away from sterile Monitoring and Evaluation Reports written for funders (and often not read by them!), an additional process would be required to ensure key learnings from these impact stories are taken back into the media planning and making cycle. That is, the approach does not really help practitioners design for or plan for impact unless key learnings are then somehow translated into a useful framework, methodology or approach. It also does not help with identifying impacts in a timely way.

Finally, Clemencia’s concept about ‘media in the margins’ and her point about not seeing this as oppositional to mainstream media is useful. Many organisations in the video4change network have already made clear that they are not comfortable with distinctions being made between commercial/ non-commercial, professional/non-proffesional, mainstream/alternative media. These divisions don’t make sense in many instances and they are simply are not helpful; they do not emphasise what really matters.

Certainly the work of Prof. Clemencia Rodriguez gives us lots of food for thought as we move forward in developing our own Impact Framework for Video for Change practitioners; I’m very glad to have had the opportunity to re-connect with her work as we do this.