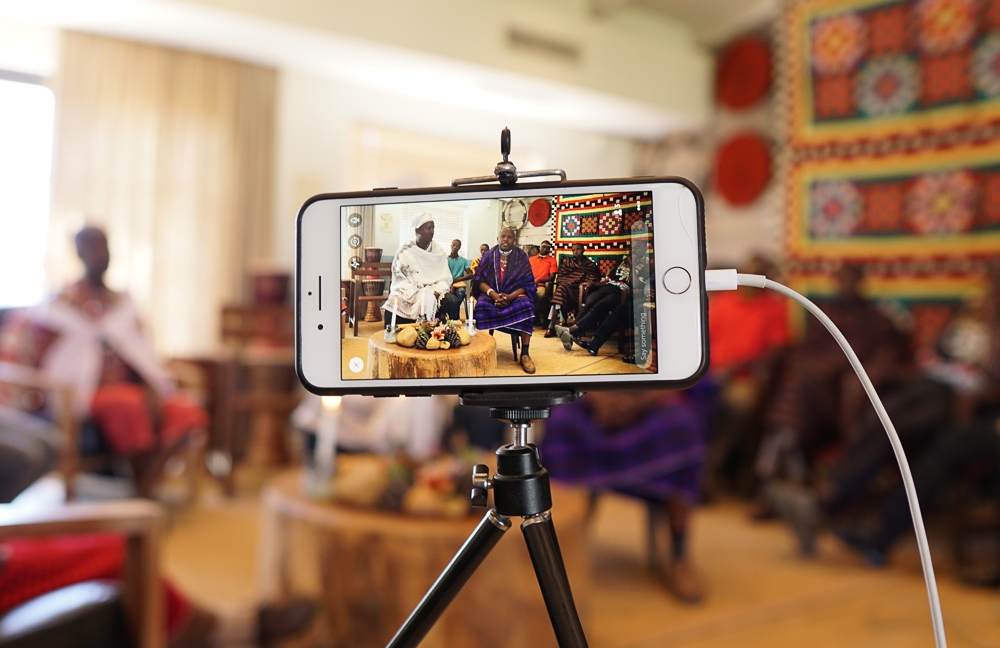 I recently had the opportunity to travel to beautiful South Africa, where I participated in the Video4Change South Africa gathering, which was organized by InsightShare with the support of EngageMedia, Witness and Video Volunteers.

Dozens of activists, video-makers, and members of organisations fighting for human rights and environmental justice gathered at the Bertha retreat, amidst the wine farms of Boschendal, Stellenbosch, for five days of sharing, connecting, amplifying, and learning.

The Video4Change Grassroots Gathering has started

After five days of mingling and sharing, I was humbled and blown away by this insanely talented, motivated, and experienced group of people, all fighting in their own way for what is right. It seems that many of these activists are fighting familiar struggles and facing similar issues across borders. 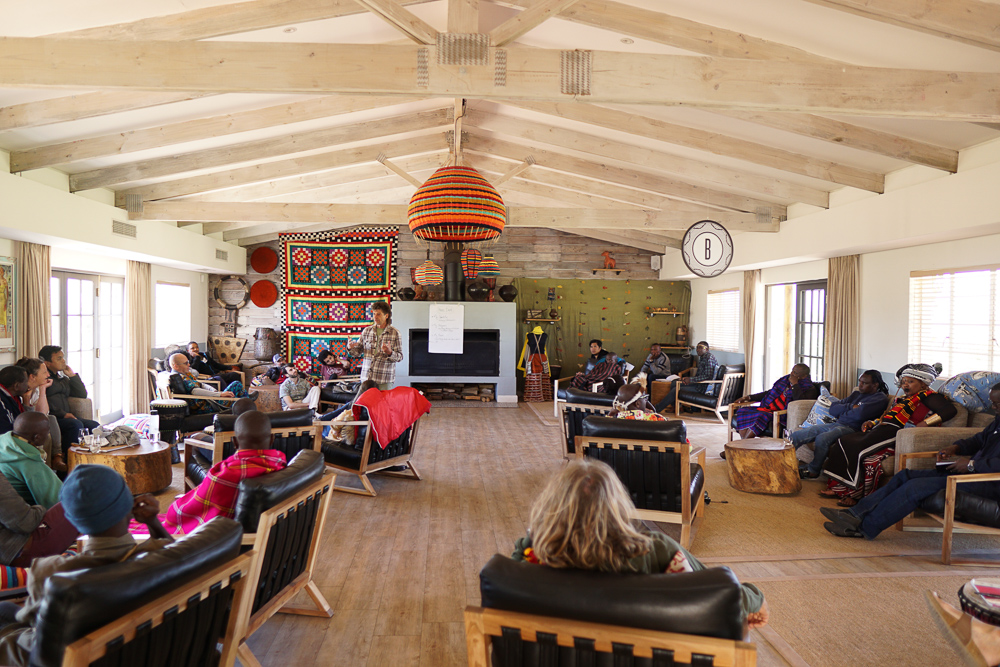 Neville Meyer of InsightShare leads a session during the workshop.

The invasive exponents of our Anthropocene age , in which extractive industries are pushed forward by government-supported, growth-orientated liberal economies, have become a clear and present threat to countless indigenous communities and ecosystems around the world. People suffering from poverty induced crime, and violent conflict over political power and natural resources are sadly a never-ending part of our world.

Nonetheless, the one thing that unites all those present at the gathering, even more than our shared stories and experiences of distressing human right’s offences and environmental destruction, is our shared belief and trust in humanity—Our hope for a better future.

Needless to say, no blog can capture all the stories and learning that took place. Here are some of the highlights from the gathering. I hope you find some useful takeaways and insights. 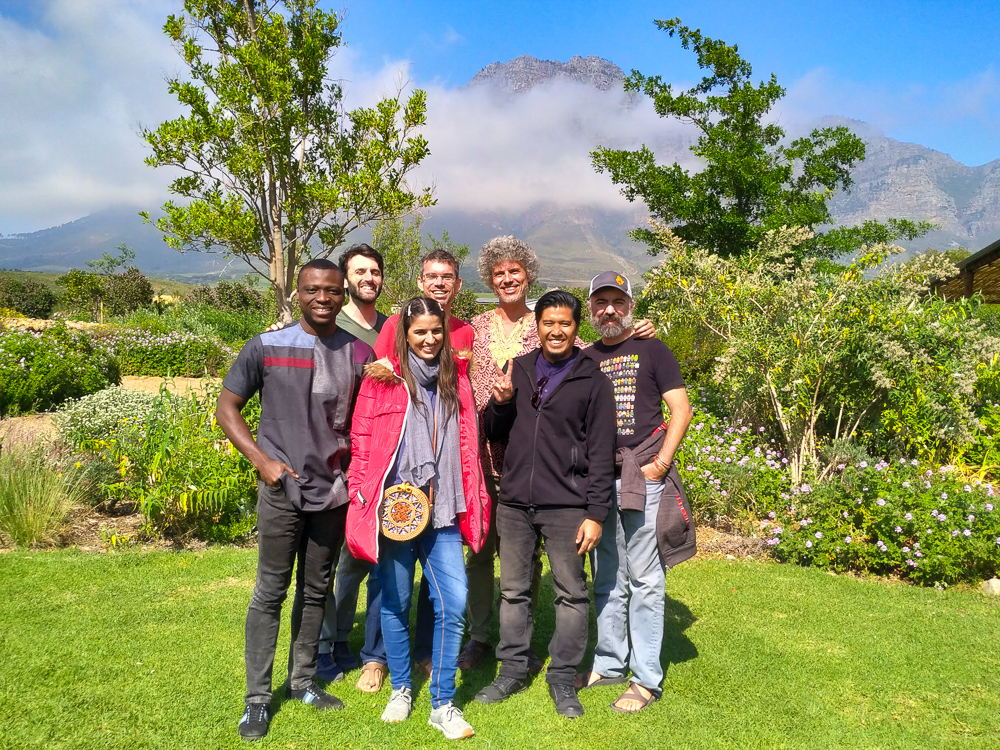 “Indigenous communities hold the key to saving this planet from humanity.” ~Shomet, PALCA

This Video4Change gathering formed a unique opportunity for many of these groups to connect and come together.

“Indigenous groups, particularly in Africa, feel very isolated and disconnected from one another, because of the colonial boundaries and nation-states. Yet they share many of the same struggles.” ~Nick Lunch, InsightShare

“This is an opportunity for them (indigenous communities, red.) to see themselves as a collective” ~Neville, InsightShare 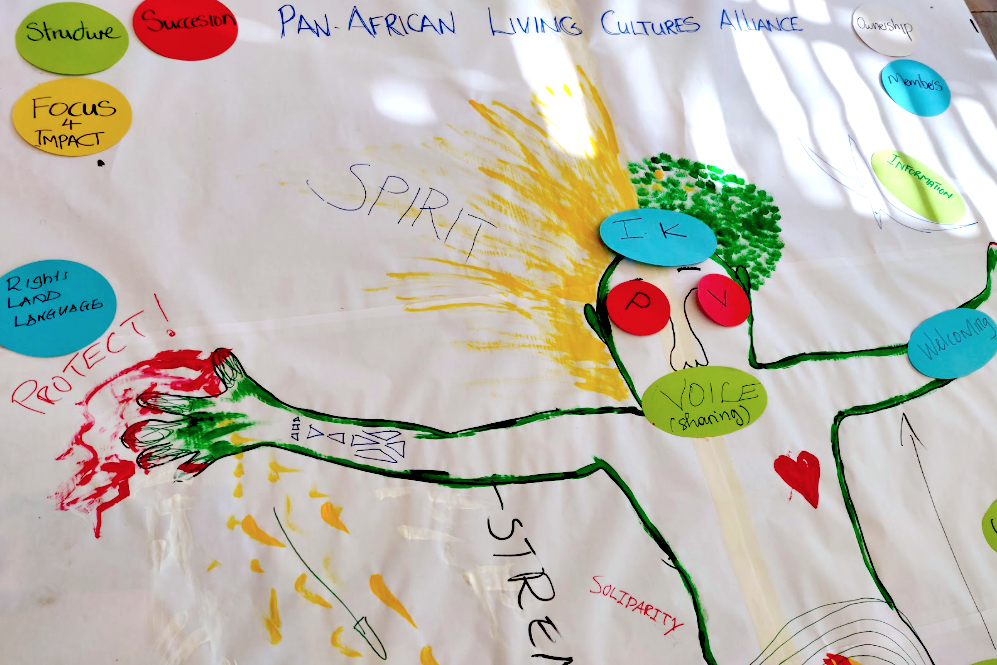 At the end of the Video4Change gathering, everyone participated in a visioning session for PALCA. Through creative activities —a body map, a river and image theatre—participants explored what a sustainable future for PALCA would look like.

The debate is ongoing, but it’s clear the alliance needs to be rooted in solidarity, working with indigenous communities throughout Africa. Each member shall focus on cultivating their lands and protecting its biodiversity. Participatory video is its eyes and indigenous knowledge is what steers their thinking. Let’s hope PALCA can grow, sustain itself, and play an important part in protecting the lands and livelihoods of indigenous communities across Africa.

“We need to go back to the essence of who we are and celebrate that there are different ways of knowing, different philosophies. There are African indigenous knowledge systems as well, and they need to be incorporated in our health and our education. For us, we need to realize we have got something to add to the world instead of just saying, “Ok, we will take this, what we have been given.” ~Ayanda Mncwabe, IQABA film festival

Activists and journalists all over the world organise and attend demonstrations to make their voices heard. However, what many may not be aware of, is that by bringing your phone along, you put both yourself and your network in danger. High powered, portable monitoring devices known as IMSI catchers get access to most data on your phone by interacting with it just as a cell tower would. 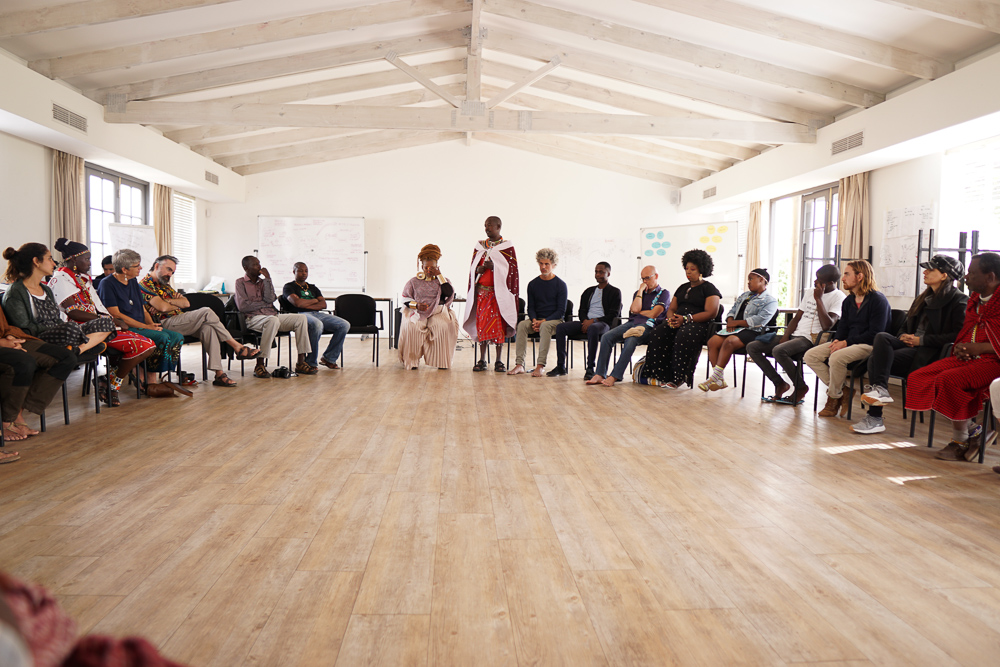 These devices are increasingly used by police and government, allowing them to potentially eavesdrop on calls and access a lot of information stored in your phone, such as who your contacts are, what media you have saved on your phone and where you have been over the past year. The high concentration of phones present at a demonstration is the ideal place for authorities to make use of these devices to capture as many numbers and as much information as possible all at once.

The expert facilitating the security session put it simply: “Generally, I would advise you to not bring your personal smartphone to a demonstration.” A solution could be a first-generation mobile phone, using a number never used before and that you won’t be using for future activism. Or, if you insist on bringing your cell-phone, you can reduce the risk somewhat by putting it on airplane mode for the entire duration you are either near or present at the demonstration. 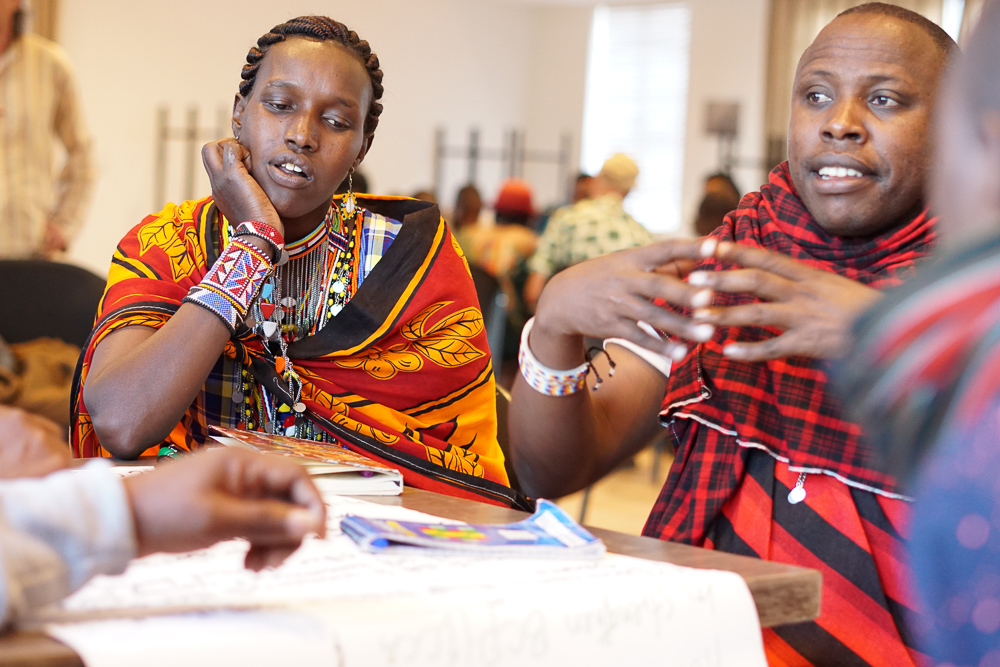 Scholar and Sam from the Maasai people

A hopeful note is that cell towers, and the unique individual data they record, can also be used by activists. A secure documentation application like Tella can be used to record events while offering some protection to your data. Tella automatically stores vital information regarding position, place, and time in your photos and videos, encrypts them for storage, and has a useful ‘delete all’ slider which can be used when your phone is at risk of being confiscated. Proper use of such an application can empower individuals and groups to produce high-quality documentation, which can be used for research, advocacy, or transitional justice.

With such an abundance of organizations represented, there were short presentations throughout the event. Here are four that stuck in my mind.

The Video4Change Network recently produced a useful resource for all activists using video to harness social change. The Impact Toolkit offers a world of useful tips and tricks on how to strategize for impact from your videos. During a session led by EngageMedia, participants were asked to describe a challenge faced by their community or one they are highly involved in personally. Next, they were asked to write down statements using the format: “How might we …………………… with video?” The resulting statement should describe an idea of an activity that meets the challenge of the community.

Broken up in groups around common themes, participants discovered that video can be used in a great variety of ways. For instance, one group chose the challenge of reducing the spread of Ebola. Some of their “How might we” statements were:

Each of these statements was then broken down further, clearly defining how video was going to be used, who to invite in the research stages, who in the production stages, where they would show their videos, and who their audience(s) would be. It was a simple, powerful exercise for anyone looking to get more strategic in their use of video for change. The Video4Change Network website, where the Impact Toolkit can be found, is filled with useful guides and referential material for all activists working (or planning on working) with video for change. You’re even invited to share on the website your own stories of working with video. 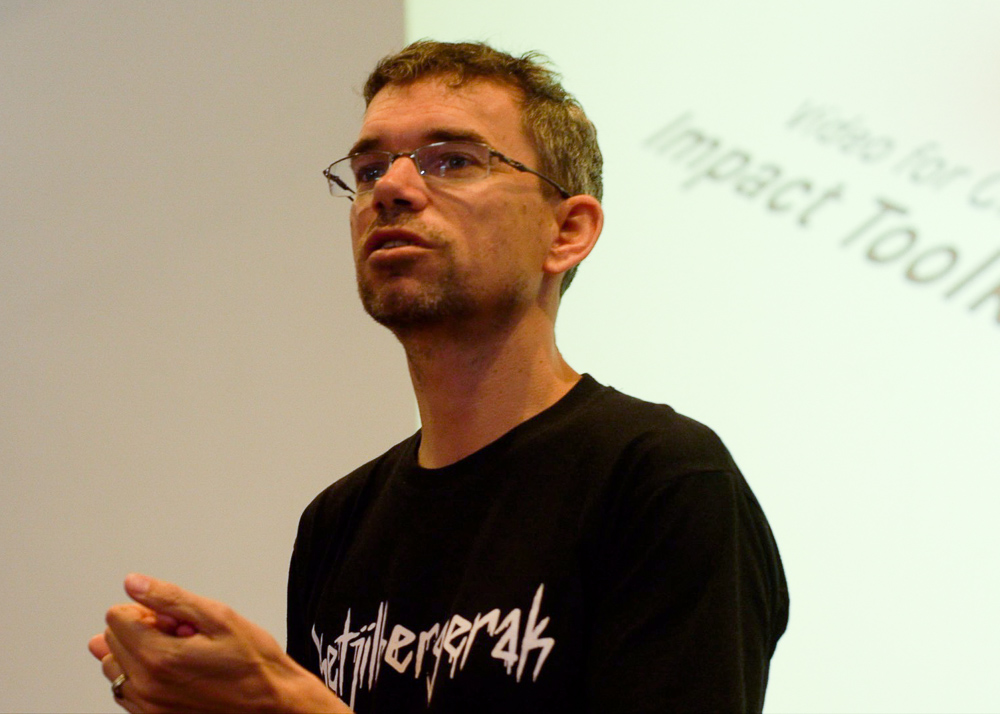 Egbert during his presentation

What would you ask the Earth?

In one of the last sessions of the gathering, we wondered about humanity’s relationship with the earth. When and where did we start looking at the Earth systematically, as something dividable, measurable, and extractable? Is this systematic worldview threatening to situate humankind outside of nature? Today 55% of the world’s population lives in cities, and this number is only growing. Add the imminent global climate crisis to this mix and we have a serious challenge in making sure humanity (re)claims its responsibility as Earth’s caretaker and custodian.

One way of connecting with the earth is imagining ways of communicating with it. How about asking her a question? What would you ask the earth? Give it a try. The resulting questions will surely provide plenty of insights and memorable discussions, as it did for the participants at the Video4Change gathering. 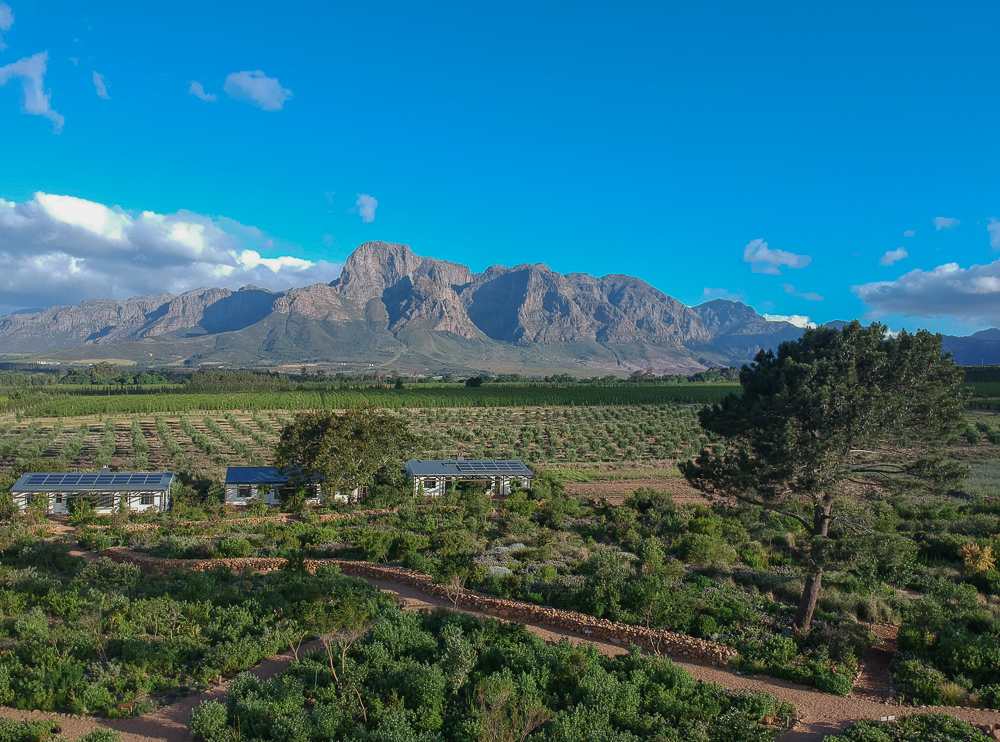 Sights and sounds from the Gathering:

After 5 intensive days, it was time to say goodbye. New connections were made, and great ideas are waiting to be taken forward. I’m confident we haven’t heard the last from this amazing group of people.

Egbert Wits is the Learning Manager, Video for Change and the Project Manager of Video for Change Impact Toolkit. He has been active in international development in Indonesia for over 12 years and specializes in training design and facilitation, community empowerment, and strengthening the capacities of local organizations.